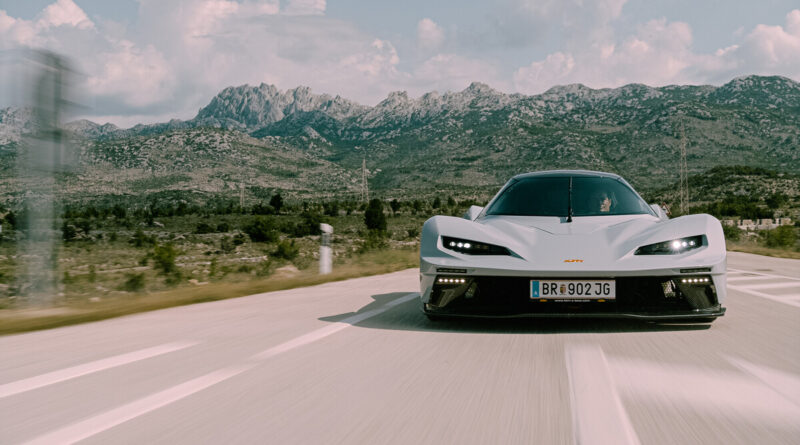 KTM has unveiled a road-going version of its X-Bow GT2 racing car called the GT-XR.

The GT-XR is altogether different to the spartan open-top X-Bow, but both cars share the same Dallara-designed 80kg monocoque structure. With the addition of an FIA-approved steel roll cage as part of creating the hard-top coupé model, the GT-XR weighs in at a relatively svelte 1,130kg. That weight, coupled with the same 2.5-litre turbocharged five-cylinder engine as the Audi RS3 (detuned to 500hp compared to the GT2 car’s to 600hp), results in an entirely healthy sprint from a standstill to 100km/h in 3.4 seconds.

Power goes to the rear wheels via a seven-speed sequential gearbox and limited-slip differential.

If the performance wasn’t convincing enough, KTM’s claim that the GT-XR is “the closest you can get to a purebred race car in a road-legal vehicle” is also, at least partly borne out by the look of the thing. Access to the interior is through a forward-opening jet fighter-style canopy (there are no doors), and the styling (by another Austrian firm, Kiska) is reminiscent of the firm’s LMP and GT racing cars. It’s styling with a purpose though, and the GT-XR has clearly been designed with at least some track use in mind.

The “Air Curtain” feature at the low-slung front-end uses vortices generated by the front spoiler and routes them around the floor to create a seal of air underneath the car, making strong use of ground effect to generate vast amounts of downforce to keep the car stuck to the road or track under cornering. The design of the floor itself is optimised to create greater levels of ground effect downforce, while there’s a big rear wing and a substantial rear diffuser too.

The GT-XR rides very close to the ground at just 9cm, which is why, if buyers plan on using theirs on more than just the track, the hydraulic lift option to raise the ride height may be a wise and worthwhile box to tick.

Those looking for Bentley levels of luxury in the interior should probably look elsewhere, but that’s not to say it’s totally without its comforts. Once drivers have shut the canopy, they’ll find a removable carbon-fibre steering wheel housing the digital gauge cluster, an adjustable pedal box, a Bluetooth audio system, LED lighting, air-conditioning and even a tiny glovebox. The option of a rear-view camera system is also probably another good box to tick as there’s practically zero rearward visibility otherwise.

Pricing for the GT-XR starts from a hefty €284,900, much more than the Radical Rapture and BAC Mono which would have formerly been X-Bow rivals. That indicates some of its maker’s intentions for the GT-XR: while the pricing puts it firmly in supercar territory, it also has the looks and performance to match.

The GT-XR won’t, however, be easy for prospective buyers to get their hands on — KTM says that it remains committed to building just 100 cars a year, including all variants of the X-Bow.