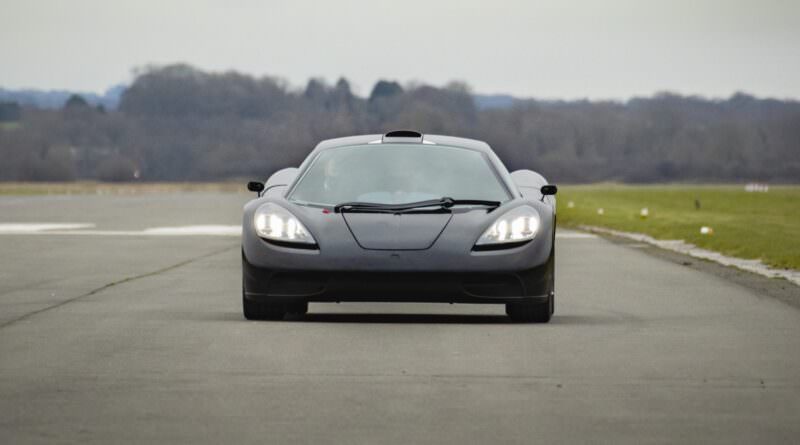 There are no words spoken in this video, or at least none that are audible to us. It doesn’t matter. What matters is that we get to hear it. Not in a test cell, not being revved up in a static vehicle, but actually moving, passing, doppler-ing by in all its V12 fury. The Gordon Murray Automotive T.50 — the car that may well be the last great supercar, has started on-track development.

This video has been shot of Dunsfold Park, which once upon a time was RAF Dunsfold and was where the Hawker aircraft company tested, and then built, the famous Harrier VTOL jet fighter. It’s better known to most of us now as the Top Gear test track (all together now: Chicago, Follow-Through, Gambon…), but Dunsfold is also home to Gordon Murray Automotive, the eponymous company formed by the one-time Brabham and McLaren Formula One designer to make his remarkable T.50 supercar.

As with Murray’s previous, greatest creation — the McLaren F1 road car — the T.50 is a three-seater (driver in the middle) supercar powered by a mid-mounted V12 engine. That V12, designed and built by Cosworth specifically for the T.50, is a compact, light, 3.9-litre unit developing 663hp at a superbike-style 12,000rpm

In the short video shot by Murray’s company, we don’t get to see that. So far, the T.50 has only hit 5,000rpm in its short shakedown run, but that’s enough to get a feel for how this incredible engine will sound. How will it sound? Amazing, if the first 5,000rpm are anything to go by — so far, it has a bassy, guttural sound, almost more like a V10 than a V12, with a touch of the 1970s Matra V12 Formula One engine. We can’t wait to hear what it sounds like bouncing off the limiter…

Murray has done a good bit of the driving himself in this video, alongside Senior Test and Development Driver, Steve Hays, and the two prototypes have a rather wonderfully mil-spec, battle-scarred appearance, with their carbon bodyshells clearly having been bolted hurriedly on (check out those panel gaps). While the proper production cars will obviously look far slicker, we’d be lying if we said we wouldn’t fancy our T.50 to look a little like this…

Designed, according to Murray, to be “without compromise [and] to be the purest, lightest supercar on the market” the T.50 will begin deliveries to customers next year, with only 100 due to be built (plus a handful of track-only versions with more power and downforce).

If this is, truly, going to be the last of the great V12 supercars — and it might well be — then something tells us that the legacy of such mad, magical machines is in good hands. (Bonus points for spotting the Martini-liveried 1974 Brabham BT42 F1 car, one of Murray’s earliest designs, in the background of one of the shots.)