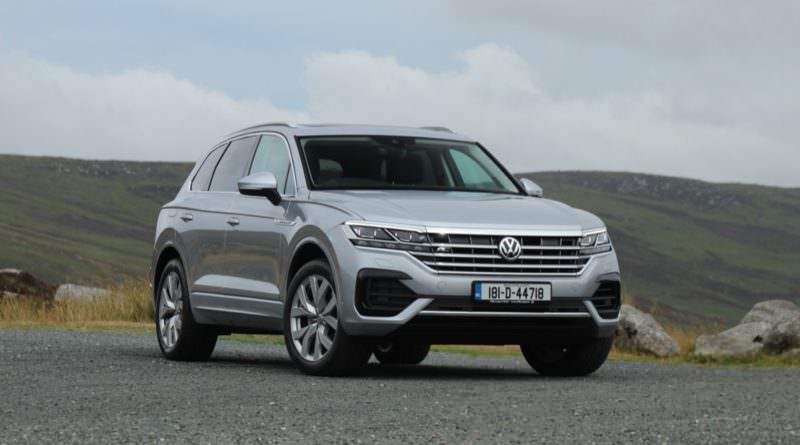 This is the third-generation Volkswagen Touareg, the brand’s flagship SUV.

This generation of the Touareg is only available as a five-seat SUV and there seems to be no plans to introduce an Allspace version like Volkswagen did with the Tiguan.

In comparison to its predecessor, the new Touareg grows by 77mm in length and 44mm in width and the roofline comes down by 7mm. Overall, the car’s proportions work well. It has shed 106kg too. The boot is a useful 810 litres before you lower the rear seats.

The version on test here is the 3.0-litre V6 diesel with 4Motion all-wheel drive and eight-speed DSG automatic transmission in R-line design. The Touareg can also be had with a lesser-powered V6 diesel making 231hp. This also comes with the DGS and 4Motion transmission.

You also have a choice of specifying air suspension and rear wheel steering. The latter alters the angle of the rear wheels depending on speed. At up to 37 km/h, the rear wheels are automatically turned to an angle opposite to the front wheels. This makes the Touareg more agile and more nimble. Especially when manoeuvring, the all-wheel steering makes its presence felt in the reduction of the turning circle from 12.19 to 11.19 meters. When driving at speeds above 37 km/h, the rear wheels turn in the same direction as the front wheels. This makes for smoother handling as the all-wheel steering system stabilises lane changes, for example during fast overtaking or lane changes on a motorway. The same applies to sudden evasive manoeuvres.

The air suspension features differing ride heights according to driving modes and can lower the car by up to 35mm at motorway cruising speeds to maximise fuel economy. Going off-road won’t be a problem either, as it can raise its body to improve ride height and approach and departure angles.

The Touareg starts at €66,245 and its main rivals are its Audi Q7 stable mate (the both use the Volkswagen Group’s ‘MLB’ platform), the Land Rover Discovery and the Volvo XC90.

The Touareg looks the business especially in this R-line spec with those large 20-inch alloys filling the arches nicely.

But for me, the big draw is the cabin, which is dominated by a new ‘Innovision’ system. This consists of a 12-inch instrument display and a 15-inch infotainment touchscreen display that appear to all form one single panel in the dashboard. It looks mega and is super nice to look at and use. It is quick and slick and adds a ‘wow’ factor.

There are a few hard plastics in the cabin that shouldn’t be there for a car that starts above €65k. The rest of the cabin is impressive too with its soft touch materials, spaciousness and comfortable seats.

That comfort also extends to the ride which is composed and mature. Grip is great and corners can be taken with surprising confidence for such a big and hefty machine.

The 286hp V6 is super smooth and refined and the 600Nm of torque makes for a brisk performance in nearly all driving conditions. But the Touareg is most at home on the motorway where cruising is an effortless affair, thanks in part to the impressive amount of safety systems and driving technology onboard.

The Volkswagen Touareg is an impressive family SUV. It is spacious, comfortable and refined with excellent road manners and handling. A steep price and high rates of annual motor tax in Ireland does somewhat diminish the Touareg’s appeal. It does come loaded with tech and you feel incredibly safe and protected behind the wheel. Nevertheless its breath of abilities and refinement is impressive.