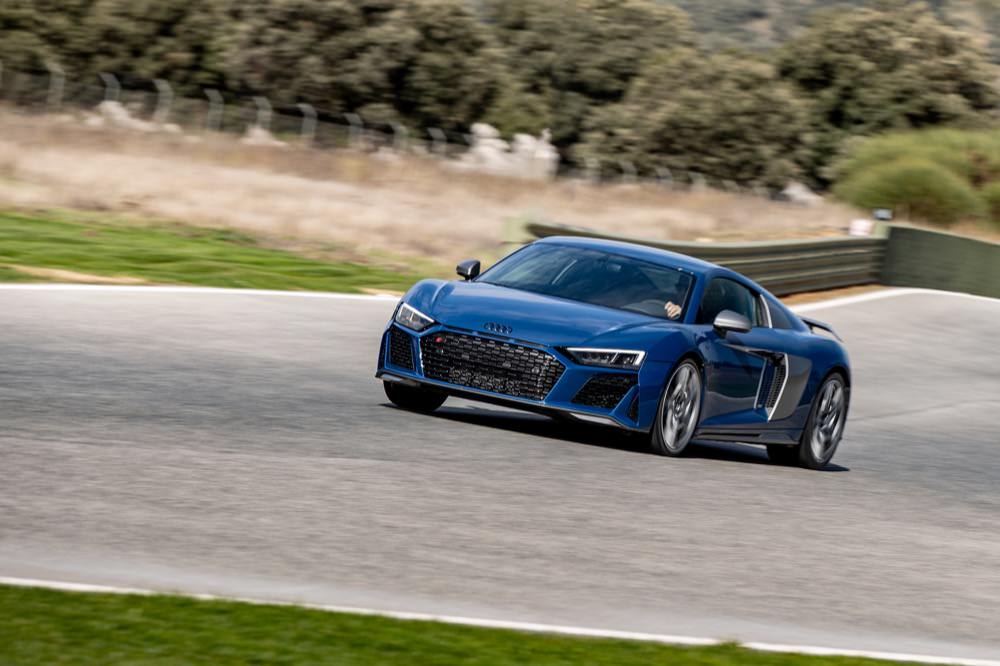 The sun went down completely an hour ago, changing the mountainous Spanish landscape from softly-lit wonderland to pitch black. At this stage of an international launch event we’re usually tucking into dinner and a glass of wine, grilling the engineers about the car we’ve spent the day driving. But this evening is different, as Audi has laid on the Ascari circuit in Spain for some night laps in none other than its 2019MY R8 V10 Performance.

Driving a fast race track at night may be second nature to endurance racers (and Audi’s highly successful forays in the sport undoubtedly lead us here to this moment), but it’s of rather more challenge to us mere motoring journalists – no matter how many laps we’ve done here during the day. 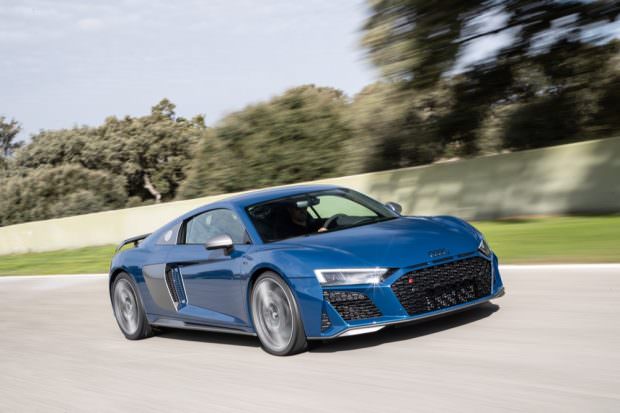 Time to don helmets and balaclavas and head into the pitlane. The cars have been warmed up for us, but we’re ominously told “the tyres are not as warm now as they were during the day – be careful.” The R8’s updated V10 sits there rumbling at an idle, an idle that rises as I press the stubby ‘Performance’ button on the steering wheel and twist the control around to the ‘dry’ setting. Press the brake, move the shifter into Drive and I swear it feels like the car is straining at the leash as we wait for the pace car up ahead to set off. 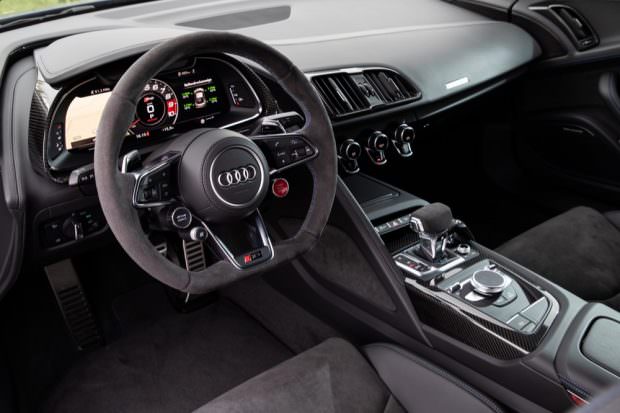 Thankfully he only leads us around for one lap, as the flashing roof bar is blinding us with its LEDs, making it rather difficult to focus on establishing braking points and apexes in the gloom. Sure, there are a few floodlights, and even cones with little flashing red lights on them to help us find our way around, but Ascari is not a night-racing circuit, so really, we’re relying on the R8’s lights and our muscle memory of the track.

Once out on our own, it’s clear that, even with the optional laser headlights fitted and set to full beam, there are parts of the circuit where it’s impossible to see the turning in point or apex clearly. Nonetheless, the R8’s chassis is relatively forgiving and the mighty brakes quick to rein in any exuberance, so the first lap goes by without too much drama and it’s time to relax into it and enjoy the ride. 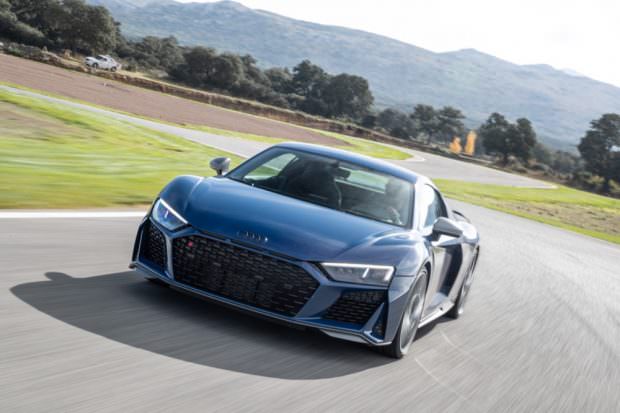 We accelerate hard out of the pitlane, uphill, with a tall wall close to the right of the car, up to nearly the rev limiter in third before standing on the brake pedal as the track dips downhill, requiring more deceleration than you might expect, certainly if you’re to clip the hidden-until-the-last-moment apex. From there you can let loose, smoothly using the whole track and balancing the quattro drive by modulating the throttle, through a sort of double ninety left that is all hung together. 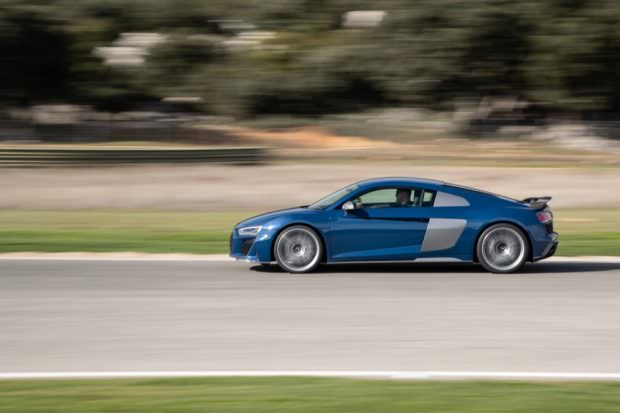 The R8 blasts out of that in fourth (or was it fifth?) and you hug the right of the track into the next braking zone. Here it’s fiendishly difficult to see where the inside kerbing is in the dark, but it’s crucial to hit the apex late and then stay left to set the car up for the fast right that follows. It’s not flat out here, but the R8 carries huge speed, almost on tiptoe as you use all the track for a moment before bringing the speed down with a decent squeeze on the brakes for another sweeping right. The temptation here is to carry speed to the braking point, but as you’re still turning, it destabilises the car, so it’s more satisfying to get the car over to the far right and slowed down nice and early. 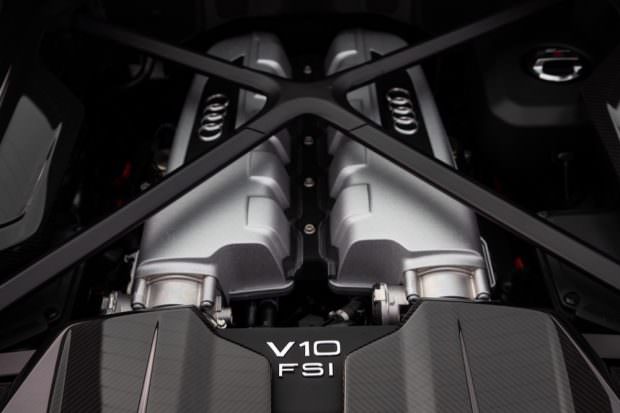 That allows you attack the next double-ninety-left section properly (this is actually a shortcut in the circuit, as the rest of it was being used for photography), even though the road narrows, and the R8 positively dances through this section. Get it right and you exit with a whiff of oversteer in second gear, quickly grabbing third and then accelerating hard, vaguely heading to the left of the track. 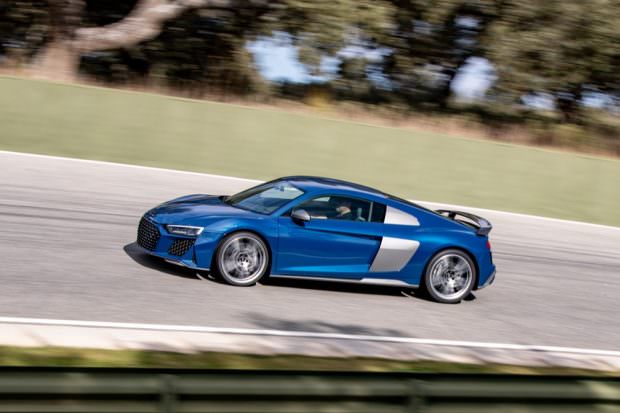 This is the fastest section, where we saw 210km/h before braking. There’s a kink right that requires a little commitment to keep your foot flat (especially in the dark where the flashing cones are a distraction rather than a help) and then it’s time to stand on the brakes again and get the nose turned into a gloriously long sweeping right. It’s important to stay close to the kerbing here and resist getting on the power, as a fiendishly tight left-right chicane follows it, trying its best to get the car out of shape. 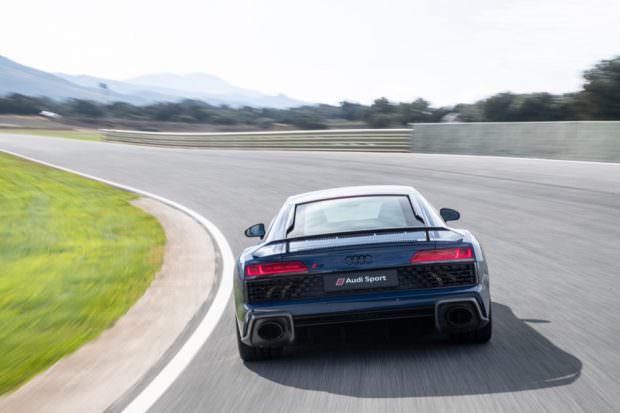 But the R8 is sublime through here if you get the entry right, rapidly changing direction and then attacking the following banked left-hander. This part of the circuit is highly technical and quite well lit, so it’s a joy to push hard through it. A sequence of banked chicanes follow the rise and fall of the land and you learn to smoothly adjust the throttle on entry to get the nose turned in, then squeeze back on the power on exit, giving the car massive pace and stance on the way out of the corners. 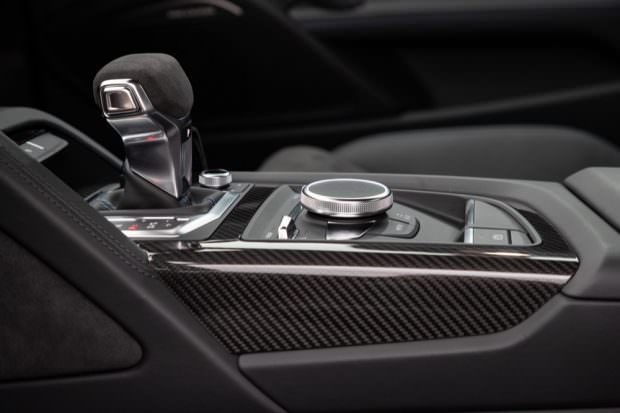 You accelerate through the last long banking left-hander for as long as you dare before braking hard uphill then diving left for the apex. Then it’s a case of staying left and feeding the steering into what feels like a slightly off-camber right hander as you balance the throttle and grip levels before spying the pit entry and backing off, changing down more gears than are necessary to hear the exhaust pop and crackle as the pitlane speed limit comes into force. 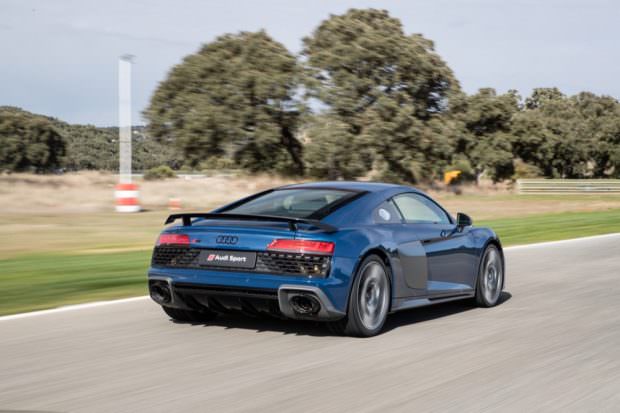 And like that, it’s over. There’s no roll cage to clamber over on the way out, but I do notice that the Michelin Cup tyres have given their all to make such speeds attainable by us mere mortals. What a great experience. What a great car.