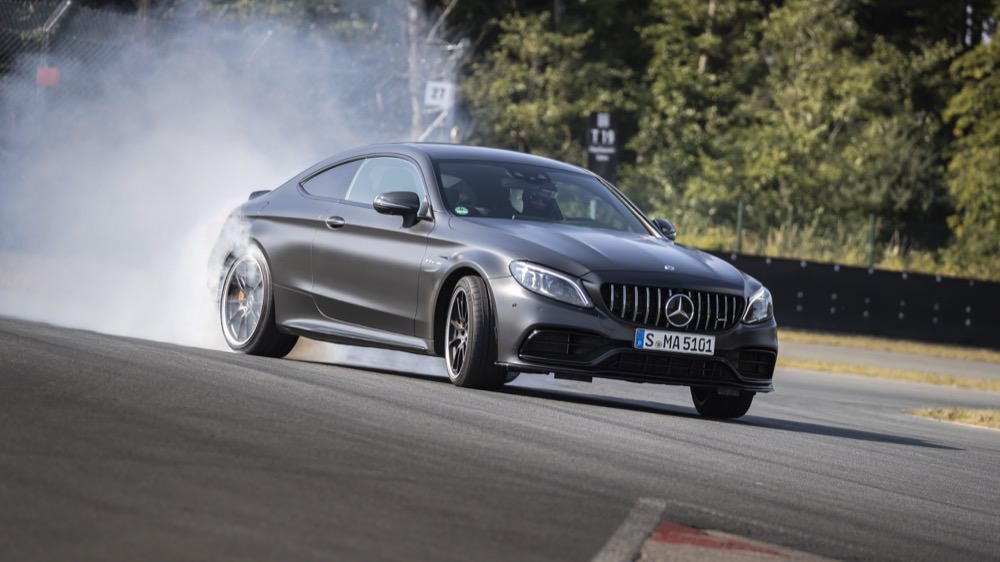 You’re going to be expecting me to say the engine, aren’t you? I mean, of course it’s the AMG C 63’s engine, right? Snorting and bellowing like Ruffalo’s Hulk with a bad headache, throwing this sensible-shoes German saloon past the scenery like someone’s leaning on the fast-forward button. It is a towering achievement of an engine — smaller in capacity yet more feral by far than its mighty 6.2-litre predecessor, and so weapons-grade in its abilities that it feels as if it should come with a megaton yield, rather than a WLTP rating. 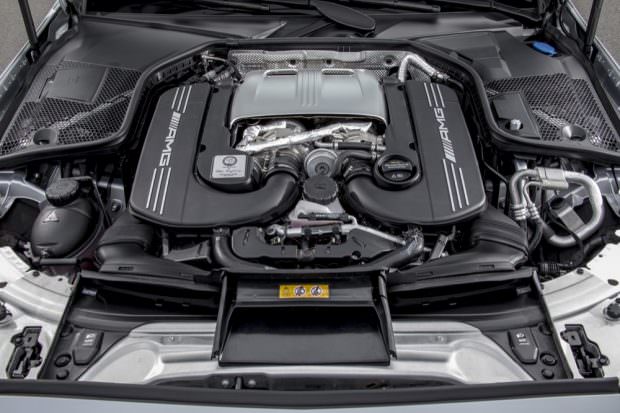 It’s not the engine, though. Honestly? Great engines are ten-a-penny these days. Yes, the AMG engine gets extra points for being a V8 where most of its rivals have only six cylinders, but are you really going to tell me that Audi’s turbo V6 or BMW’s inline-six , or Lexus’ naturally-aspirated V8 are any less than this? Come on…

No, what I really loved about the AMG C 63 was its driving environment, which is a posh way of saying the bit you sit in. Not the cabin as a whole (nice though that is), but the actual driver’s side stuff. 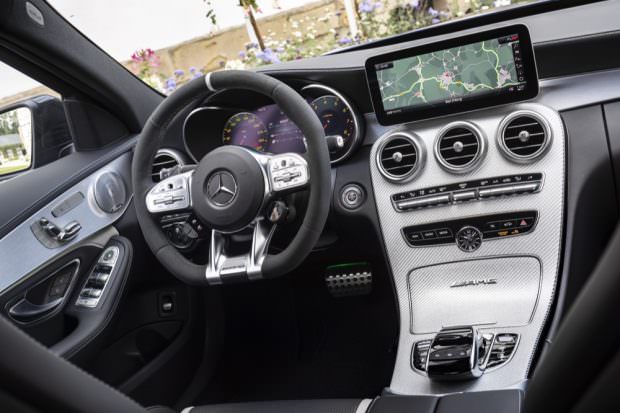 For a start, Mercedes has done a better job with its digital instruments than anyone else to date. Sure, Audi’s Virtual Cockpit is nice, and the C-Class does lack the plank-like full integration of dials and centre screen, as seen in the E-Class, but even so this is an impressive dial pack. You can shuffle things around to your liking much more than you can in rival products, and the eighties-style yellow-on-black Sports display really tugs at my heart strings. 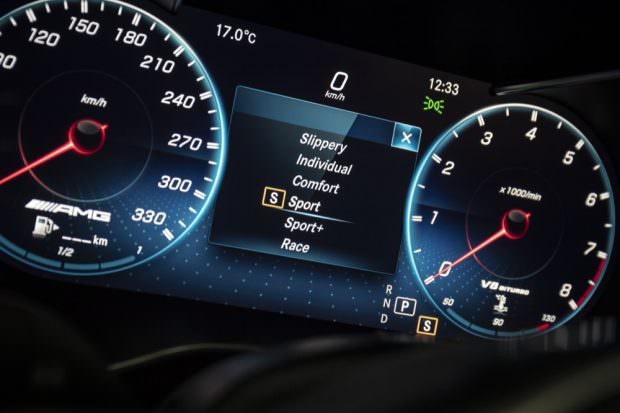 And then you realise that not only can you change the display, you can change what and how the display displays (it even has tyre temperature read-outs and no I don’t care how inaccurate they may or may not be, as that’s just awesome). There are so many sub-menus and extra layouts that it could be bewildering, but it’s actually pretty easy to shuffle through them with the little pads on the steering wheel, which you stroke with your thumbprint.

Ah, the steering wheel. Generally, we bemoan steering wheels with a flat bottom (because in a car designed around 95th percentile adults it’s just so pointless) and the AMG C 63’s wheel goes one further because it’s been slightly flattened on the sides as well, but we’ll give this one a pass. Why? Because. It. Feels. So. Right. Will someone please bring one of these along to the BMW M division steering wheel department and tell them that this is how you design a wheel? Especially with the optional Alcantara suede grips, it just feels fantastic to fondle. 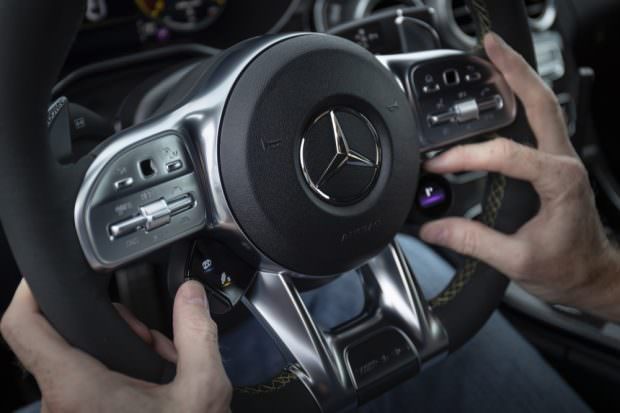 Finally, there are the extra buttons — one circular, one kind of U-shaped — that hang from the steering wheel spokes. On the right is a rotary switch, which allows you to dial up Comfort, Sport, Sport+ or Race modes. True, you can do that from the Dynamic Select switch on the centre console, but this is better — tweaking the steering wheel buttons as you drive just gives you that wonderful sensation of race-driver-ness, as if you’re charging down the Mulsanne while dialling up the right engine map. 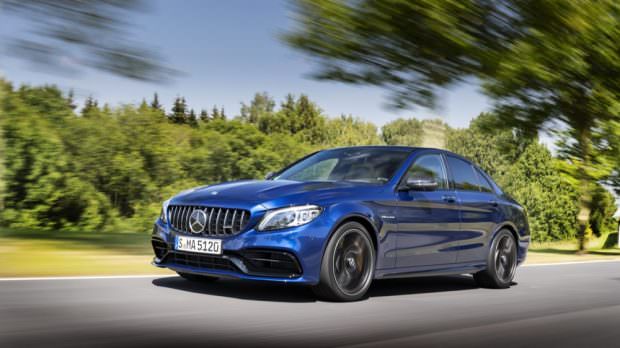 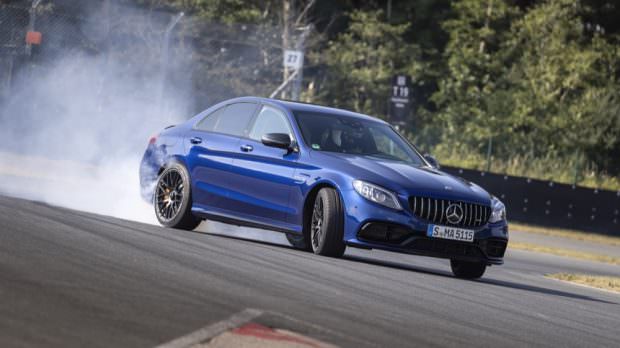 It gets even better when you’re in Race mode, because then the rotary controller switches entirely to traction control and becomes basically a volume knob for how loud you want the tyre squeal to be. Twist to the right for maximum smoke and noise, to the left for nerves less shredded. 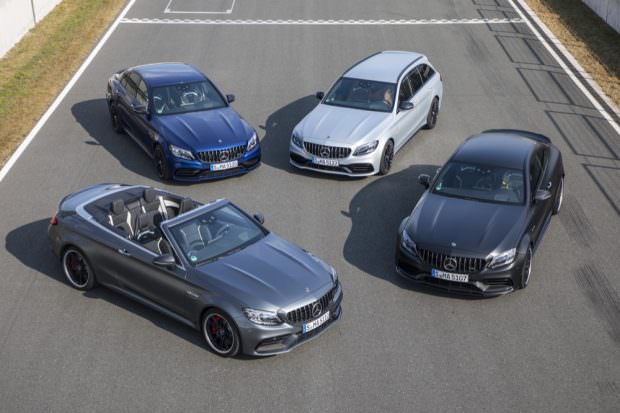 So, yeah, the C 63 AMG has an epic engine. But the bits you use to control it are even better.

Read the full review on CompleteCar.ie