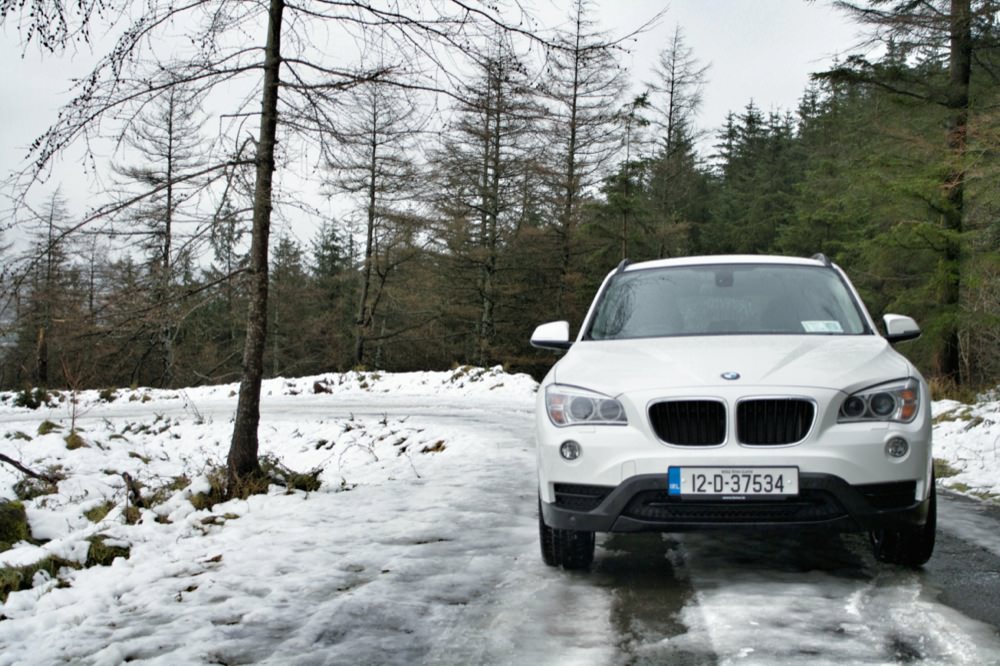 My first day of seven in which I would living with BMW’s X1 couldn’t have started off in a more perfect way. Snow. Quite a bit of it in fact. What made this perfect? The BMW X1 I’ve been given to test out is their xDrive (BMW speak for permanent four wheel drive) and is equipped with winter tyres. 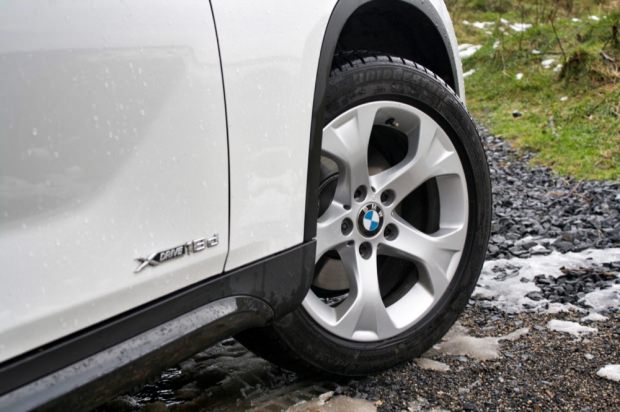 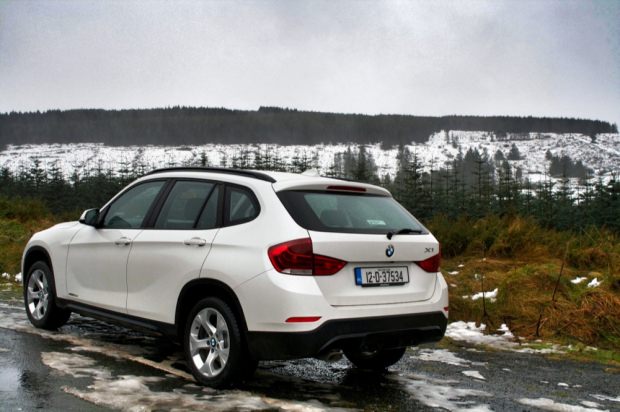 Now there are a lot of people that might regard the X1 as ‘not a real off-roader’ as per it’s BMW X designation, so in the interest of public service I’ve desired to make some of the snow covered fire roads in the Dublin Mountains my very first port of call. I’ll either get to prove a large portion of the public wrong, or else I’ll be phoning the lovely people in the Mountain Rescue service. 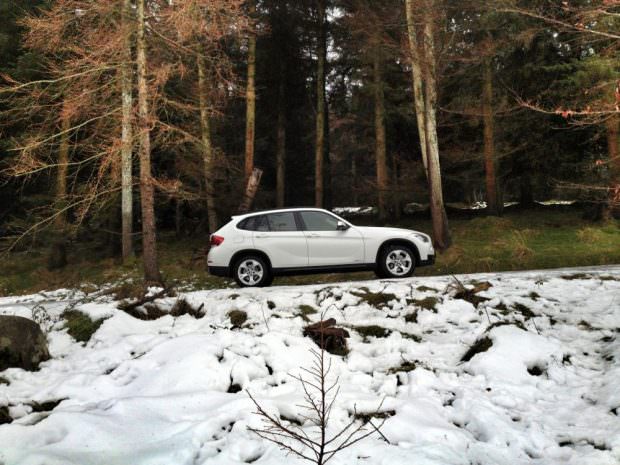 “I’ll either get to prove a large portion of the public wrong, or else I’ll be phoning the lovely people in the Mountain Rescue service. “

As I pulled into the last car park at Ticknock to take in what could be my last view of Dublin (joking!) I’m greeted by a walker who informs me that I should drive no further as I’ll end up getting stuck. I’m clearly going the right way in my test so. Being xDrive means I’ve got four wheel drive all the time and does so by way of an electronically controlled multi-plate clutch that allows the transmission to vary the power between the front and rear wheels according to grip levels. On the uphill stuff it handles it all with what appears to be zero fuss but it’s on the descent that the system impresses more. 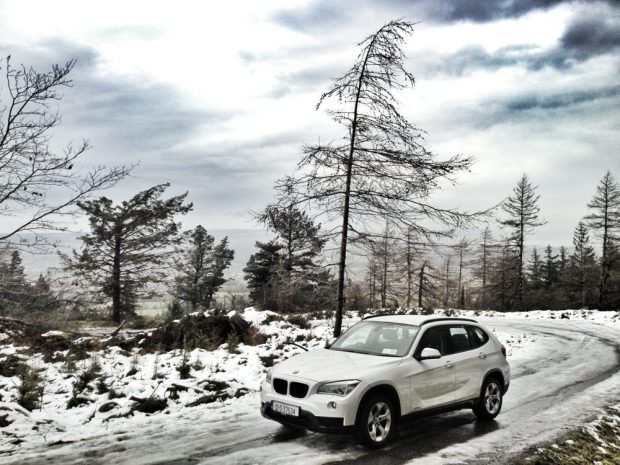 Along with the xDrive is BMW’s DSC traction control system and HDC (Hill Descent Control), which for those that may be a little unsure about driving off the beaten track, allows you you set the speed at which you want to descend enabling you to concentrate just on the steering – the car controls the rest including throttle and braking. It can be a little unnerving at first, but once you trust the system it works impressively well. 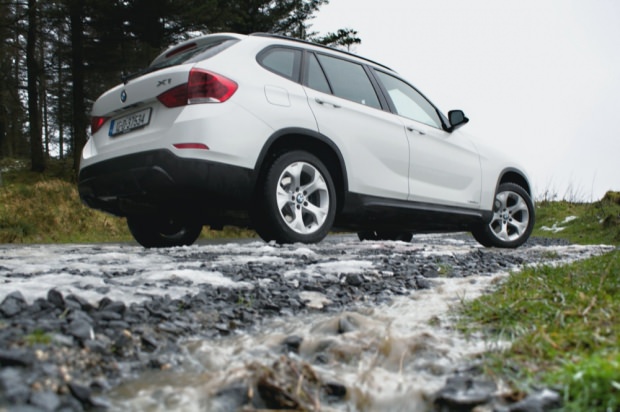 But let’s be honest here, very few people are likely to be doing this with an X1 so it was time to get back onto the tarmac to see what it’s like doing other real-world tasks. The 8-speed gearbox is quite smooth in its shifts and when being light with the throttle it uses its ratios to keep the revs to a minimum allowing that 2.0 litre four cylinder diesel to remain fairly economical – I averaged just over 6 l/100km over a week. For everyday use the 143 bhp are more than enough, in fact it’s only when you really try to hurry along the engine that you notice any slight lack of power at the upper end of the rev range. 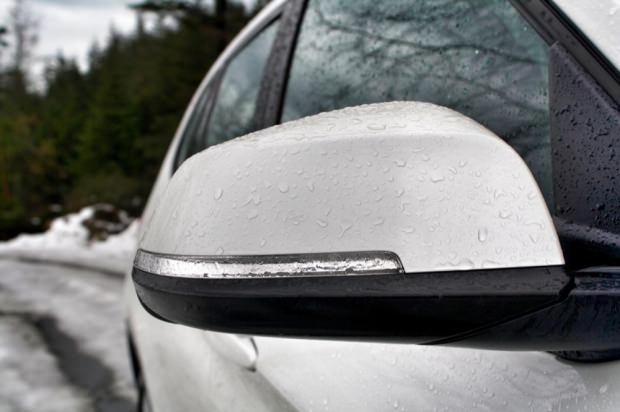 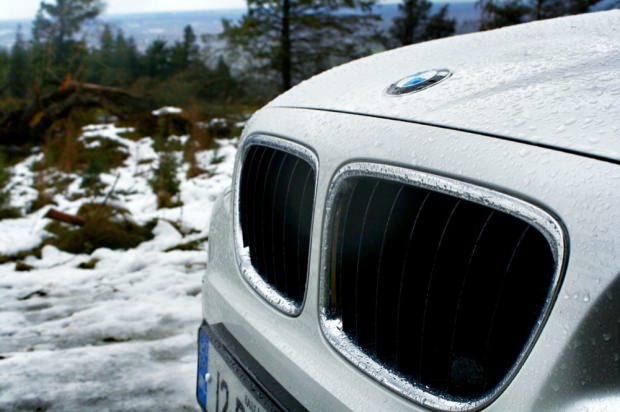 Inside BMW have done a nice job with the design. It’s instantly recognisable as BMW and thanks to some well thought out design make for a spacious feel in what it’s still a relatively compact vehicle – its only marginally longer and a tad wider than the 1 Series though the extra height is a bonus, especially inside. There’s also plenty of versatility in the form of rear seats which can be split 40:20:40, with the three sections able to fold down individually or all in one. The boot is a fairly generous 420 litres with the rear seats up and is helped by a low level entry. 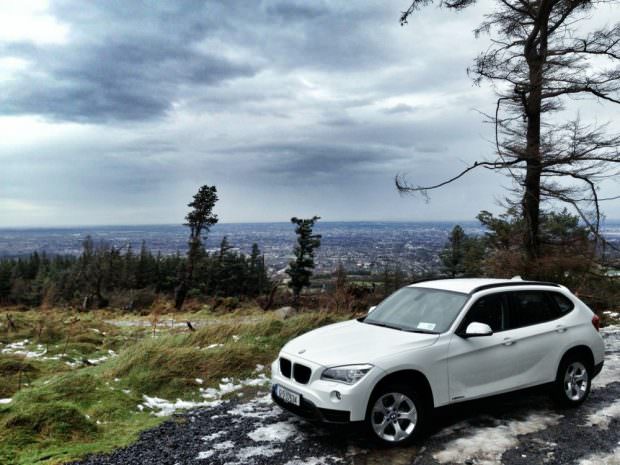 For me the X1 was a pleasant surprise. It’s easy to see how it can be viewed as a solely a family car but as my winter driving demonstrated it is actually a much more versatile bit of kit than most will give it credit for. The less adventurous may decide to just go for the sDrive (rear wheel drive) version though if you do want the feeling of extra stability on the road and indeed even fancy a little bit of soft-roading the xDrive is worth the extra.