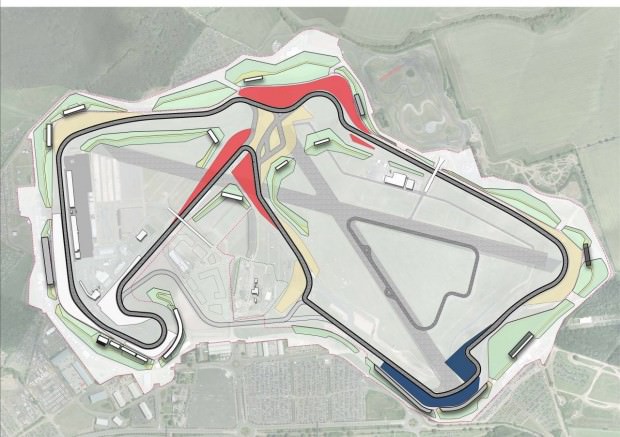 I say old boy, it’s time for a spot of motorized bicycle racing as the MotoGP circus heads over to jolly old England for Round 6 of the championship. Of course if you’ve been to England you’ll know to replace the words jolly and old with windy and raining. The venue is Silverstone for the 2nd time since its return last year. I have to say it’s a bloody amazing circuit. The corners are named after very posh places but the corners themselves are anything but – boasting very wide entries and exits which sweep into one another they allow for a variety of lines to be taken in order to nail a section of the track. Not dissimilar to the old Assen track (at least until they bulldozed the best bits).

All through practice it was the great white hope Cal Crutchlow whom everyone was watching. Last year he had cartwheeled the expensive Yamaha down the track, broke his collarbone and was unable to start his home race. Cal was hoping not to repeat the feat this time round. However, like hoping for a dry sunny day in Britain, it wasn’t to be. Maybe it was the conditions or maybe the British don’t like change as C2 promptly cartwheeled the expensive Yamaha down the track, fracturing and dislocating his ankle in free practice leaving him unable to qualify. The session itself was just as wild and expensive, with both Ducati riders crashing at the exact same point shortly before the rain came down. This abrupt end left an unlikely San Carlo Gresini Honda rider, Alvaro Bautista sitting pretty on pole position with an equally happy Ben Spies beside him. Rounding out the top three was Casey Stoner, who possibly blamed his lack of pole position on an errant ham sandwich. 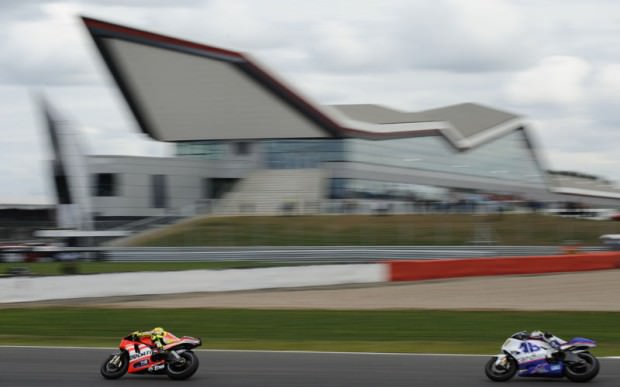 With the clouds holding station the lights flicked out and the race was on. Streaking out in front at the beginning was Ben Spies, followed by Bautista, Stoner and an equally fast starting Nicky Hayden. Both Americans barrelling through with a precision akin to driving a tank through a china shop. Silverstone’s wide corners proving helpful for the wide load riders in the early stages. Surprisingly, starting well (or even starting at all) was Cal Crutchlow. Given a special pass to start, being from the land of fish and chips, he was up from 20th to 16th by the end of Lap 1 but surely that would be the end of it for the bloke with the dislocated ankle, right?

The battle at the front was getting very hectic with Dovizioso, Pedrosa and the slow starting Lorenzo tacking onto the lead group. As Spies and Bautista argued over position Stoner swept by to take the lead, and was looking like he was about to embark on his trade mark domination from the front. It might have happened except for the current world championship leader, and world champion prankster, Lorenzo. Jorge had been wobbling around for the first few laps but he suddenly found the go fast button on the Yamaha (unlike Spies) and scythed through the podium pretenders to catch up with Stoner. Once again the open corners of Silverstone allowed for an attack by Lorenzo as he and Stoner traded positions over the course of 5 corners before the Spaniard emerged at the front. 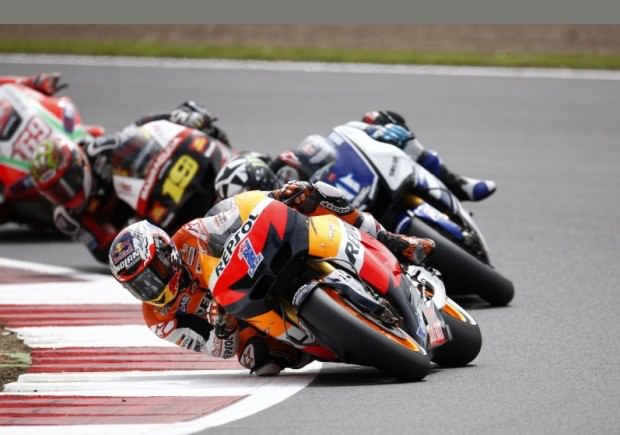 Behind the two front runners, everyone was all over the shop. First casualty was Nicky Hayden, with the “improved” Ducati looking as agile as drugged sloth, dropping out of contention by mid race. Spies’ hard charging pace at the start was begining to falter as he slowly got caught and passed by Pedrosa and Bautista. Dovi was charging so hard to pass Spies that he charged into the gravel and racked up some more bills on Tech 3’s bodyshop account. Further back his team mate was giving new meaning to the word “hard” as the injured Cal was thundering through the field. Lapping a second quicker than everyone bar the front runners, Cal had dispatched the CRT bikes, the satellite bikes and some factory bikes to catch and pass Nicky Hayden on the last lap for 6th.

As the race laps ticked down, unfortunately so did the excitement. Stoner was unable to haul in Lorenzo who cruised over for another victory and extended his lead in the championship to 25 points. Pedrosa made a late charge but it was like a particularly disgruntled bee trying to attack and angry kangaroo and so Stoner held for second with mini-P in third.

At the CRT end of the field, it was once again the two Power Electronics Aspar boys of Espargaro and DePuniet battling it out for top honours. Though the coverage only just showed it, it was a hectic last lap battle with the Spaniard coming out on top (again). Frustrating for DePuniet who had led for the entire race. 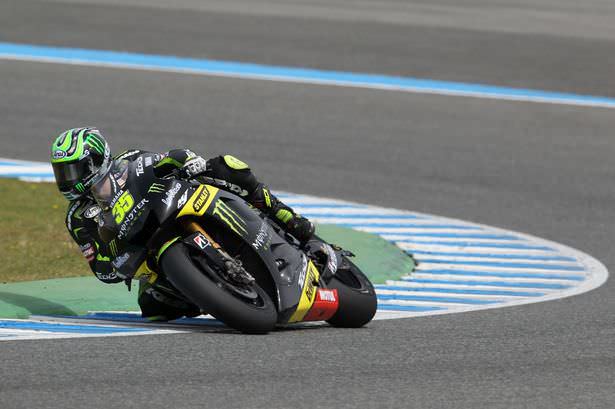 Rider of the race is undoubtedly Cal Crutchlow. Coming from 20th to 6th with a fractured ankle on a non-factory bike is simply astonishing. Cue dam-busters music, Battle of Britain comparisons etc,

Has been steadily getting better and faster on the satellite Honda. The promise showed on the nightmarishly bad Suzuki is starting to shine. Pole position and an exceptionally close 4th, dicing with the factory boys all race long. With Stoners seat up for grabs next year, Alvaro has surely done himself a big favour.

After two reasonable races, and then two subsequent testing days, we expected big things from the Italian. Dismally slow after strangely choosing the hard tyre, he finished over half a minute down on the front runners. Is it all the bike? Or has the hero really fallen from grace?

Next up is Assen, which is always good even if they did destroy the track. See you there for a smoke and a pancake.