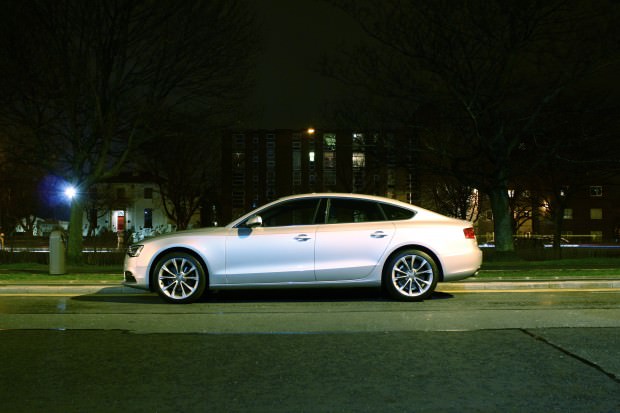 The Audi A5 may be squarely aimed at BMW’s 3 Series coupe, but where does the Sportback fit in? Well it actually doesn’t really have any direct rivals at the moment yet it cleverly does cover off several different niches. The Sportback offers much nicer lines than the coupe in my opinion and also gives that bit more practicality. Unlike when it was first launched, the Sportback is now offering a third rear seatbelt as an option which again opens it up to more people. 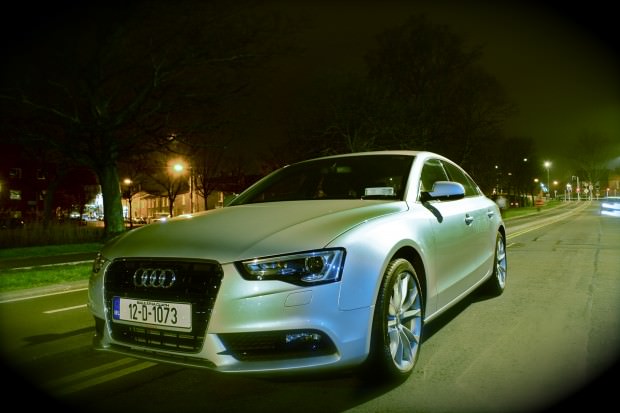 Walk a lap of the A5 and you’ll see a lot of attention to detail. That strong shoulder line that runs from the tip of the headlamp right along the side and all the way to the rear helps to give the Sportback a taught look whilst the sloping roof line is in my opinion the most well executed of all the current crop of coupe/saloons. Step inside and close the pillar-less doors with a reassuring clunk. Unlike its coupe sibling, the Sportback doors are a little shorter making it that bit easier in car parks – a small but beneficial positive.

Once inside its all very German and very Audi. My test car was rather well equipped – I especially liked the half leather half alcantara upholstery. That added to the optional sports seats inside really made it look top notch and something that set it apart from the A4 Avant that I tested a few weeks ago. Like that, this car is also powered by Audi’s 2.0TDI (177bhp) engine, which I think is one of the best diesel engines I’ve driven recently. 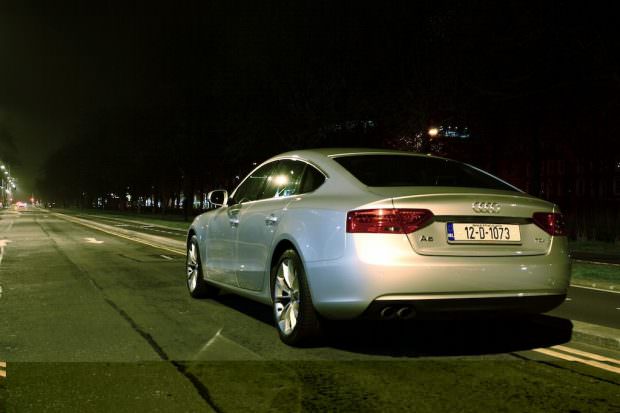 Also inside, as mentioned above, is a third seat belt in the rear gives the car a good deal more usability. There’s plenty of storage and cubby holds in the cabin which in this car also benefits from ‘Aluminium Trigon inlays’. Life on longer trips is improved by three zone climate control (optional) and cruise control (standard). One thing that I wasn’t overly keen on though was the servotronic speed related power steering. Find yourself driving through a city, in traffic and you’ll find it to be light as a feather which is fine, but its when you get out on the open road, particularly through some twisty stuff, and you then notice what feels almost like lag from the steering. I’ve seen other people describe it as a ‘numbness’ from the steering, and its a characteristic that once I noticed it I became more and more conscious of it.

Fuel economy is definitely one of this Audi’s best traits though. The four pot TDI unit certainly offers more than enough performance, though what impressed me more was just how frugal it was. Even with my not-so-economical driving shoes on I managed to get just shy of 1,000 kms from its tank. This is partly helped by Audi’s Start / Stop System And all this while still falling into Tax Band A with emissions of just 120g.

One aspect that has been improved upon although not eradicated since the Sportback’s launch in 2009 is the firm suspension. Its hard to ignore it, especially on some of Dublin’s worn out roads. If I were to directly compare this A5 with the A4 Avant I previously had I think the difference in suspension would make the A4 the winner, despite the A5’s gorgeous looks. 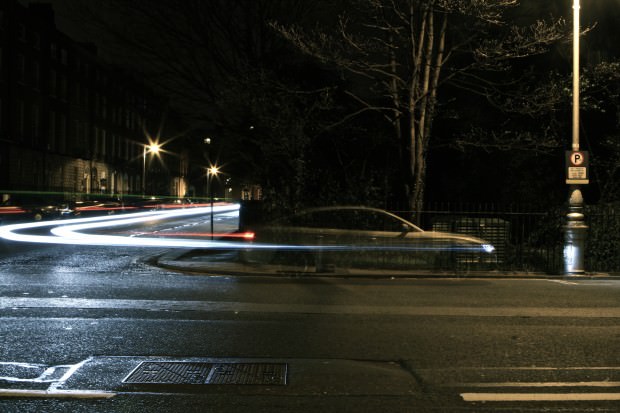 So, why get one? Well unlike the usual saloon choices, the A5 Sportback offers looks that are well ahead of other similar sized and priced cars, and gives much more practicality than its coupe brother.