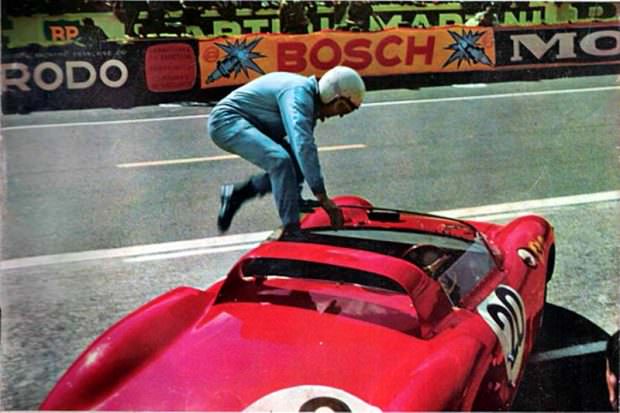 In the second of my series entitled When Men Were Men, I look at this iconic photograph of Jean Guichet leaping into his Ferrari 275P. Many motorsport fans will accurately guess that this depicts the famous start of Le Mans, whereby drivers would race on foot across the pit lane to their awaiting race cars.

The year is 1964. Everything seems to look like its been through an Instagram app. The US launch attacks in North Vietnam. Cassius Clay defeats Sonny Liston to win the heavyweight boxing title. The Beatles sing I Want To Hold Your Hand. Teamsters leader Jimmy Hoffa is convicted of fraud, conspiracy & jury tampering.

The world seemed like a very different place to how it is now. Racing drivers partied as hard as they drove. They led lives that were a different kind of glamorous to today’s racing drivers. They didn’t wear seat belts. Their overalls were more to keep them clean than safe. They raced cars that attainted speeds not dissimilar to todays racing cars. There weren’t kevlar honeycomb crash structures to keep them safe. Many wouldn’t live to see out the season they started.

Instead, they sprinted against eachother before jumping into their open roofed race cars before going at it hammer & tongs for 24 hours. When men were men.