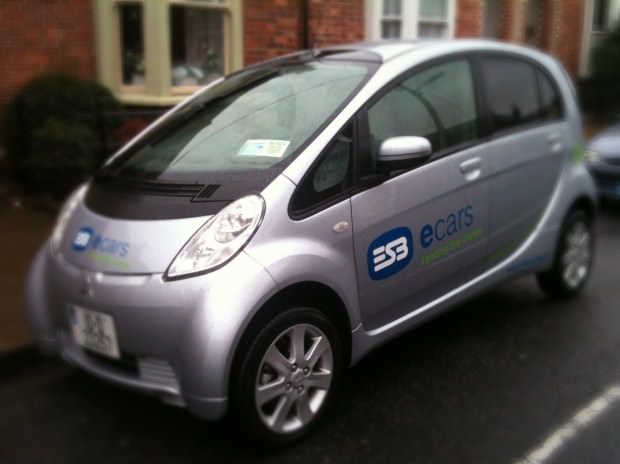 To look at, Mitsubishi’s iMiEV has proportions that seem pretty unique. The same could be said about the styling too. It may look a bit odd, but I actually like it. At 3,396 mm in length and (more importantly) with a wheelbase of 2,550 mm, its clear to see that the iMiEV is all about maximizing interior space from what is still a relatively small vehicle – just 1,475mm or 58 inches to non-metric folk, wide. The iMiEV might not be anything too new – first launched in 2009, but it is now also coming onto the market with Peugeot & Citroen badges – the iON & C-ZERO respectively.

As one would expect from a Japanese city car, there is some very clever packaging at work here. The 16 kilowatt-hour lithium-ion battery pack, which consists of 88 cells is placed in the base floor of the car meaning that the interior space is optimized. This also helps to significantly lower the car’s centre of gravity thus giving it a slightly more stable feel. The rest of the car’s interior is fairly minimalist – but I’ll come back to that later on. Open the noticeably light drivers door and you’ll discover that cabin access is effortless. Slot in the key and all that will greet you is a quiet beep. I’ve driven quite a few electric vehicles but its still a mixture of spooky, weird and future-cool to have a vehicle that makes no noise when its on. Slip it into D, lift foot off brake pedal and it just creeps away.

Driving the iMiEV around town and its clear to see that this is where its most at home. Having its wheels right at the corners contributes to a rather tight turning circle and the almost nonexistent overhangs means that you can really squeeze it into some tight spaces. The long sloped windscreen gives almost panoramic visibility which is aided by the fact that it has some pretty slim A-pillars – handy when trying to spot suicidal cyclists and pedestrians.

I found two areas where I felt a little let down by the Mitsubishi; the interior really does feel very basic and not in a cool minimalistic sort of way. Switchgear and controls feel cheap, plastic-ey and not what one would expect to come in a car that retails at just under €30,000. By means of comparison and although in a slightly different segment, Nissan’s Leaf is not that much more expensive yet has an interior that is way ahead of the iMiEV. Secondly – the range. Now, in the iMiEV’s defense, the particular car that I drove was one of the early production cars which don’t have the most up to date battery cells in them. I collected the car fully charged and with it showing a range remaining of just 62kms. Ordinarily and if I was only driving around Dublin city this wouldn’t bother me too much as it regenerates energy under braking, but as it was a cold and wet morning I had some very fogged up windows. When I turn on the de-mister (which was absolutely necessary) the range plummeted to just 40kms. Not awe-inspiring given the climate in which we live.

As a small city car that can comfortably seat four people, the iMiEV works, but I think you’re be better off with the Mistubishi i – their 659cc petrol powered version. For me, if you’re determined to go electric, the Leaf is still top of my pile.