When it comes to custom motorcycles, many tend to follow a similar pattern or formula. Steve Culp doesn’t stick to the norm. The US bike builder recently developed a custom bike like nothing I’ve seen before. Using a new BMW S1000 RR Superbike, he set about creating one of the most eye-catching and opinion-spliting custom motorcycles in recent years. I recently spoke with Steve to get more of an insight as to just how much work went into creating this truly unique motorcycle.

What made you decide to create it from a stock S1000 RR?
The BMW rep thought it would be a great idea to show a custom RR that had bolt on components implying anyone can trick one of these out without having to alter the bike. I have always liked the older BMWs, so I wanted to incoporate the tank that looked like it sat on top of the frame rails.  The white pinstripes, bar end signals, Bumm mirrors and even the tractor seat which was used on early BMWs in the 20s, 30, and 40s.  Just no fringe.
The plan was also to show people that a RR could be modified and drastically changed without alterating the Traction Control and ABS.  I think it is still the only bike with Traction Control which is a great feature. I wanted to enter it in the Rats Hole Show at Daytona Bike Week but they dropped the Street Fighter class this year so that was a no go.  However, we did show enter it at several other shows, some of which catered to Busas with extended swing arms and the RR walked away with Best Bike of Show awards and the likes. BMW also wanted to be seen in another light rather than the typical BMW rider in a riding suit churning out miles. 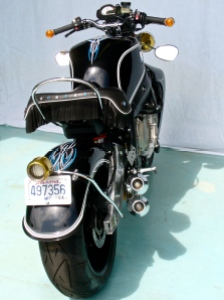 What exactly needed to be done to carry out the creation?
Initially bucks (the opposite of a mold) had to be made for the composite parts, then forms for the fenders, gas tank, radiator covers, and seat frame cover – all of which are composite. The tank cover had to be able to match up to the frame rails which required the stock tank having the top side panels brought in .200 on each side.  If you picture the sides of the tank in the stock configuration they were out over the frame rails a bit, so a cover that went over the tank would be too wide to fit on top of the frame rails.  So the tank sides were brought in and the cover just slips on and off after removing the emblems which cover the front mounting screws and the rear mounting screws are in plain sight.  It took a lot of time to get the tight fit between the cover and the frame rails and also the seat frame cover which has no visable fasteners showing.
Another big challenge was mounting the fenders.  The front fender use parts from a stock fender brace from an R60 and then adapted to mount the to calipers and stock front fender mounting tabs on the front forks  The rear fender mounts were the existing threaded holes for the hugger and holes in the aft swing arm for sliders.  The rear had to be strong as the fender is mounted to the swing arm and get a lot of shock loads. Some wiring changes which were to lengthen the front wires to reach the instrument and shorten the wires under the seat as it gets a bit crowded in there.  There are a lot of wires on this bike!
Were many of the new parts used readily available or did some of them have to be specially machined?
The  purchased parts are as follows:
The built parts are as follows:
Did it take long to complete?
450 hours
Have you calculated what the total cost of the job was?
Yes, prototyping is always expensive and I have about 45K in it.

And finally, what does it ride like?
Just like a stock RR with a more relaxed riding position.  My wife Liz, myself, and some friends put close to 1000 miles on it at Daytona and the consensus it it very comfortable for about 100 miles then it is time to stretch ones legs and get some gas as the stock tank is kinda small.   It does get windy at anything above 130mph with no windshield or fairing.

Porsche & The Arts Of Speed