Everything I’ve thought about electric cars has been changed forever. There, I’ve said it – no point in beating about the bush. When I first saw the Nissan Leaf I was genuinely curious to experience what it would be like. In case you haven’t heard much of it so far, here’s the info; its a medium sized hatchback car with more than enough room for five adults, its entirely electric so there’s no engine as such, you don’t ever need to put petrol or diesel into it and there isn’t even an exhaust pipe. Yes, you read that correctly, no exhaust pipe – NOTHING comes out of the back of this car. So it must be like a golf cart then I can hear you say? Nope. Its comfortable, has all the things you’d expect from a modern car including sat nav, climate & cruise control, bluetooth, reverse parking camera and alloy wheels all of which come as standard. Nissan are only bringing the Leaf into Ireland in this one spec, meaning that you get all the toys for the one price.

One thing I’ve repeatedly come across when talking to people about electric cars is that there seems to be a lot of misconceptions and misinformation regarding them. Yes you are going to be limited in how far you can travel in one due to its range and yes they do need to be charged up daily if used a lot. But what Nissan have done with the Leaf is completely change how people will see electric vehicles. Here’s how. Its 9.30 am & I’m in Dublin based Nissan dealer Hutton & Meade who were more than helpful in arranging the car for me to take. Rather than just handing me the key and pointing to a few buttons, Alan Clark (their Leaf Specialist) takes me out for a quick spin to talk me through and demonstrate all of the Leaf’s many functions. Once back to the dealership, I jump into the driving seat and I’m off for the day.

The Leaf has a keyless ignition, so in order to get going in the Nissan, you simply push an ‘On’ button. The dash lights up and within three seconds its ready to go, although its still deathly silent in the cabin. Press the brake, select Drive, pull away and it makes not a whisper. Not a clunk, squeak or rattle. If you’ve never experienced it before its rather bizarre. The divil inside me puts the foot down as soon as I get onto the main road and immediately its clear that this is no slouch. The beauty of electric power is that you don’t have to wait for it – you have all the power straight away from a standstill. But for me what is even more impressive is its gearbox or lack of actually! The power delivery is smoother than any ‘traditional’ automatic and no lull in acceleration as it doesn’t ‘change’ gears. This was the first time I’ve experienced this and it really is impressive, even if you’re cruising along and decide to floor it there is no kickdown – just instant torque. Electric – One, petrol – Nil. The gearbox itself has two drive settings, the latter is an Eco mode which reduces power but increases range even further.

One aspect of the Leaf I really liked is that for a car which is very clever & advanced under the skin, it feels remarkably normal to both sit in and drive. Nissan’s designers haven’t tried to recreate the bridge of the Starship Enterprise inside rather they’ve made an interior thats simple yet modern and clean to interact with. In fact barring the lack of a conventional gearshift, nothing in this car tells you its electric. The LCD dash is well laid out and very easy to read with its two main areas of display being your speed and actual range remaining. When driving along and you lift off the throttle (and/or apply the brakes), it begins to regenerate electricity thus recharging your car’s batteries. To give you an example; by the time I drove from Hutton & Meade’s Ballycoolin location into Dublin’s city centre, my car’s predicted range had extended by more than 14kms – on what is a 15 km trip, so not only did I essentially get a ‘free’ trip, I also got the return too!  Electric – Two, petrol – Nil.

City driving really is where this car I think comes into its own though. The nature of traffic can become tiring and even with the advent of stop-start technologies in engine design, its still where car drivers get the least value for money for their fuel pump purchases. One of the trump cards with EV’s is that they use virtually nothing when stationary in traffic, so you won’t see your range plummet if you’re caught up in another tailback. Electric – Three, petrol – Nil. 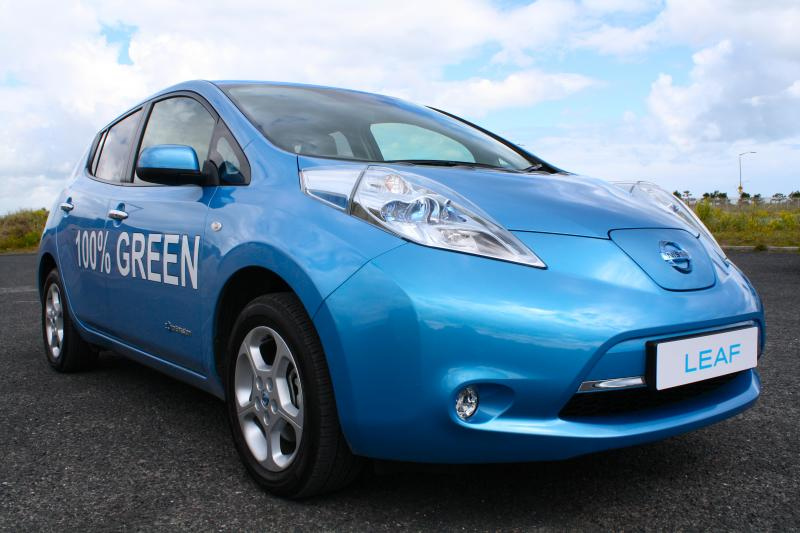 I could go on and on trying to convince you all of the benefits of an electric car but I won’t. To be honest, a car like the Nissan Leaf does require a certain type of owner as its not going to suit everyone’s needs. Its range from full charge to zero is about 175 kms and to fully charge it can take 8 to 12 hours but when you have your own home charging point it could easily fit into your daily ritual of things to do. And charging can be made even easier as the Leaf comes with its own iPhone App to allow you to not only control when to begin charging, but one can also remotely activate its climate control meaning that while you’re getting ready on that cold winter’s morning you can enjoy getting into a pre-heated car (much to your neighbor’s annoyance).

Figures wise, the Leaf costs just under €35,000 (but you do get back a €5,000 government grant upon purchase) and after which you will only pay the lowest rate of road tax at €104 per year although a potential for €0 road tax is also being examined as a further Government incentive. Average annual running costs for LEAF are expected to be approximately €232 (calculated on an average 19,000km per annum) and that’s less than €20 per month. This represents a saving of over 80% on running costs compared to traditional vehicles. Nissan reckon you will save upwards of €2,000 per year on running costs and long-term that will increase as you have fewer mechanical parts to wear out on an electric vehicle. The Leaf won’t revolutionize our motoring way of life overnight, but what it does is give a much stronger case for people to now seriously consider electric vehicles as a viable alternative to internal combustion engine. After my day with the Leaf I genuinely felt like I had sampled the future – like the first time I held an iPhone. This car didn’t simply impress me, it genuinely blew me away. Go drive it for yourself, I guarantee you will not be let down.

Special thanks to Hutton & Meade Nissan for their help in making the car available.