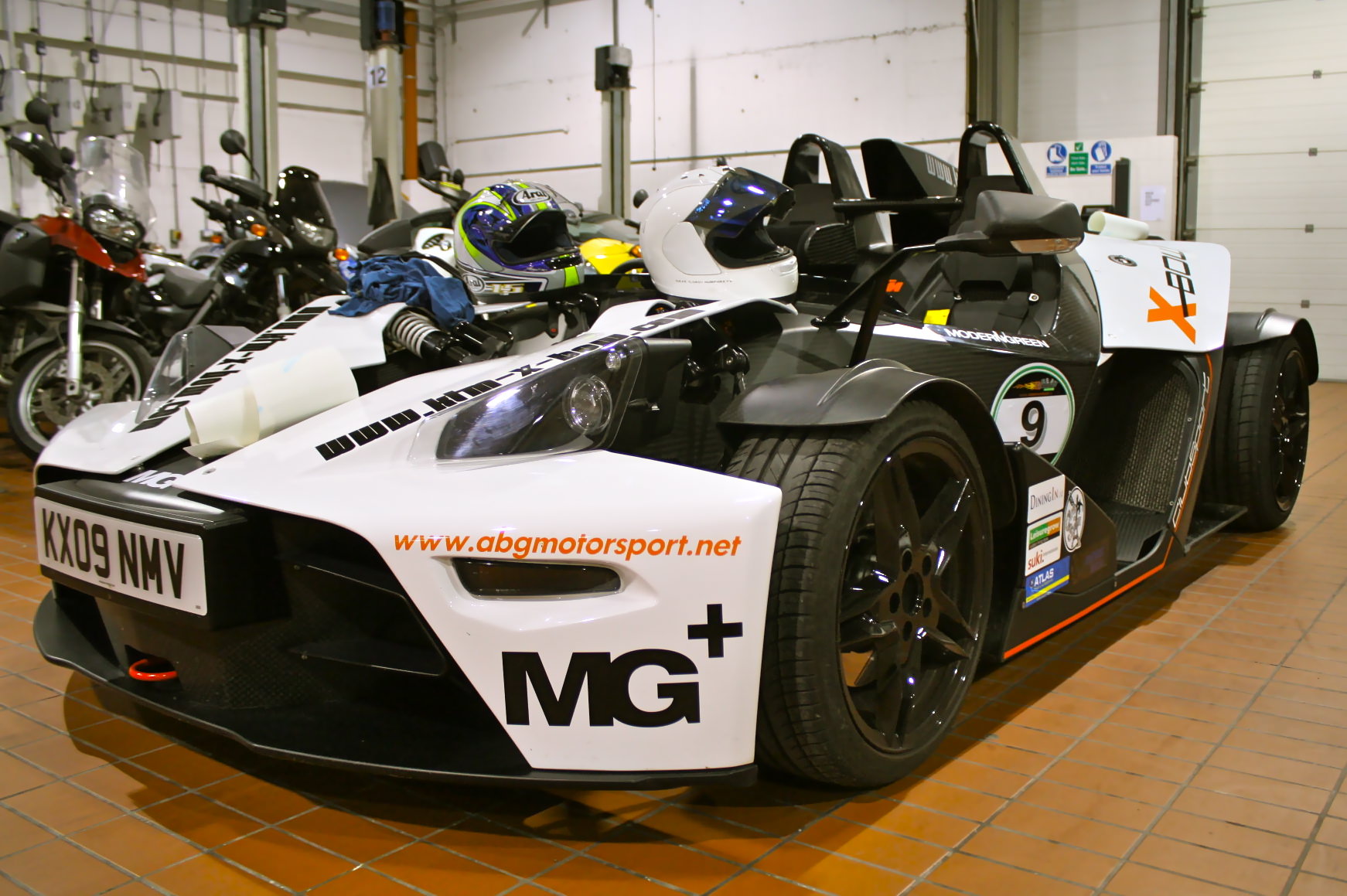 Back in 2009, I stumbled upon an upcoming charity road rally – the Cannonball Run. From the outset, I knew this wouldn’t be as crazy as some of my previous entries into these kinds of ‘events’. Within five minutes, I was in, within ten minutes so was my buddy Ian. Now we needed a car. Over the next few days we dreamed up a wish list of what would be most desirable and also most unusual. We knew they would be the usual stud of Italian prancing horses, and litters of Porsche’s, so it had to different. And so, it would be agreed, the KTM X-Bow is what would be required! All I had to do was get one! Luckily, my co-driver was able to write all the necessary emails to the right people, and before long, KTM were all go for us to use their car for the event. And so, for seven sweet September days, Ireland would see its first ever KTM X-Bow.

Flying into Liverpool, we were whisked up to ABG Motorsport to collect out X-Bow, which was the higher spec Clubsport model, which included newer wheels, a more hardcore race seat for the driver -complete with wrap-around head support, and came in a very fetching white. The first time you clap eyes on this car, you really do just stop in your tracks. Its uber low, relatively petite, but mainly looks like a spaceship that has just landed. Before we take charge of the car, we’re taken on a quick tour of the workshops, which on that morning contained a Dodge Viper GT2 car, two Ferrari 360 Challenge racecars, including one fitted with hand controls, as its driver is wheelchair bound owner of Haynes Manuals, as well as a collection of Ginetta racers.

After a short run through on the KTM’s controls, all of which are wheel mounted, I do up my racing harness, pull on my helmet, and hit the road back to HolyHead for your ferry back to Dublin. Instantly, I feel that this isn’t just any normal car. The steering really is go kart like, and the throttle response is very crisp while the airbox mounted between the integrated roll hoops makes the most glorious sound as it feeds the Audi sourced turbo charged engine. There is surprisingly little turbo lag, and the engine pulls well even in higher gears at low revs. The one thing any X-Bow driver must get used to is the attention that it receives. Everywhere we go, there are camera phones constantly snapping away at the car, although ironically when we pull in for petrol, people don’t approach to talk about the car, instead just look on as if we’ve arrived on an intergalactic vessel.

Surprisingly, on our mainly motorway journey to the ferry port, the car seems to be averaging almost 30 mpg, happily cruising along in fifth. Road handling is superb, and I’m impressed at just how usable the car feels. Yes, its a dedicated trackday tool, but this car really does make traveling feel pretty comfortable. The only complaint I’d have is that you do need to prepare logistically before you go anywhere in this car. There is literally zero storage space with this, the best you will be able to do is pack a small rucksack and shove it down in the passenger footwell. Wind buffeting is relatively low, considering how open the car is, and despite the lack of any heaters, you won’t get too chilly in it. Visibility is top notch from the tub mounted mirrors, the only drawback being the reduced peripheral vision due to the ClubSport model’s race seat.

Ultimately, this car in less than a day completely blew me away and won me over. I could live with how the car can sometimes be awkward, the lack of servo brakes, the lack of power steering, the lack of everything in fact. I loved how raw and pure the car felt. The steering allowed me to feel just what the front wheels were doing, while at the rear, giving the loud pedal a stomp mid corner, would induce one of the most controllable slides I’ve experienced in any car. It gave confidence, without allowing one to get too cocky about it.  On track the car feels superb, but once I got a little more used to it, I felt the need and want for more power, at least another 30 bhp would have completed the car. This is, and will likely always be, a unique & expensive toy for a select few. Given KTM’s well publicised trouble in shifting units, you won’t be seeing many of these on the roads or on tracks. There are cheaper options, more powerful options, but for me, I’m won over. Its more enclosed than an Aerial Atom, cooler looking than virtually anything else, and even gives respectable fuel consumption. Nearly three years on from me driving this car, I still have fond memories, and it remains on my wish list for when those magic six numbers come up. If you ever get the opportunity to experience one of these then do so – you won’t regret it.