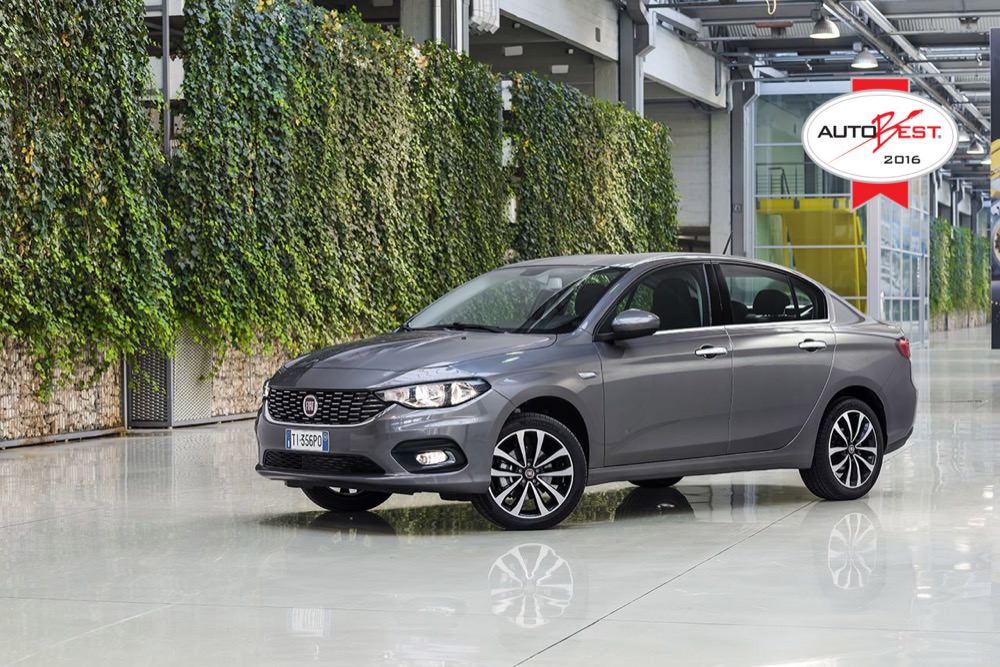 The new Fiat Tipo has been voted Autobest 2016 by its panel of 26 jury members, of which 50to70 Editor, Dave Humphreys, is a member. Seen here in saloon form, the new Fiat Tipo family will expand to include a hatchback and estate version, both of which will debut at the Geneva Motor Show in 2016.

Voting was close amongst the five finalists that included the Opel Astra, Honda HR-V, Hyundai Tucson and Mazda CX-3. Thirteen different areas were up for consideration including design, driving characteristics as well as value for money and cost of ownership. In the end the Fiat Tipo scored 1,492 points, narrowly edging out the Opel Astra to second place.

“I am very much looking forward to the introduction of this excellent C-segment model next year,” says Sebastiano Fedrigo, head of brand, Fiat  UK. “Beautifully styled and built to the highest standards, the car will bring a new dimension to Fiat’s model line-up and will, I am sure, attract a lot of interest from our customers.”

Fiat also now becomes the first brand to have won the coveted Autobest title three times since the organisation was first established in 2001. Previous winners were the Panda in 2003 and the Linea in 2008. The award ceremony will take place at a gala evening in Milan in February.

The jury also voted in a number of other categories, with the Companybest award going to Koç Holding Automotive Group, which is based in Instanbul, Turkey. This company plays a leading role in the Turkish automotive sector and conducts industrial operations, sales and after sales operations for Alfa Romeo, Ferrari, Fiat, Ford, Jeep, Lancia and Maserati.

The Ecobest award was given to the International Council of Clean Transportation (ICCT) for its outstanding activity towards reducing vehicle emissions. Its co-leader, John German, lead the team that helped to expose Volkswagen’s emissions cheating software and continues to test cars by using real world conditions with independently-sourced cars.

TomTom won the Smartbest award for its HD Traffic system. This looks at a number of alternative routing corridors between your current location and your destination, having a different and more effective way of collecting traffic information and delivering it to the user.

Volvo Drive-E engines were the winners of the Technobest award. This latest generation of Drive-E powertrains combine power, efficiency and also being a commitment to sustainability. It delivers the low-fuel consumption and emissions of a four-cylinder engine with the performance of a six or eight-cylinder.

The area of design was also recognised, with Mazda’s Chief Designer, Ikuo Maeda, receiving the Designbest award. Maeda took Mazda back to more traditional methods. He overhauled the design process to begin every project with sculpting and gave the clay modellers even more input in steering a vehicle’s style. The shift began in 2009 when Maeda took over the reins, although it is only now appearing in the head-turning Kodo design language that has analysts raving about Mazda’s latest lineup.